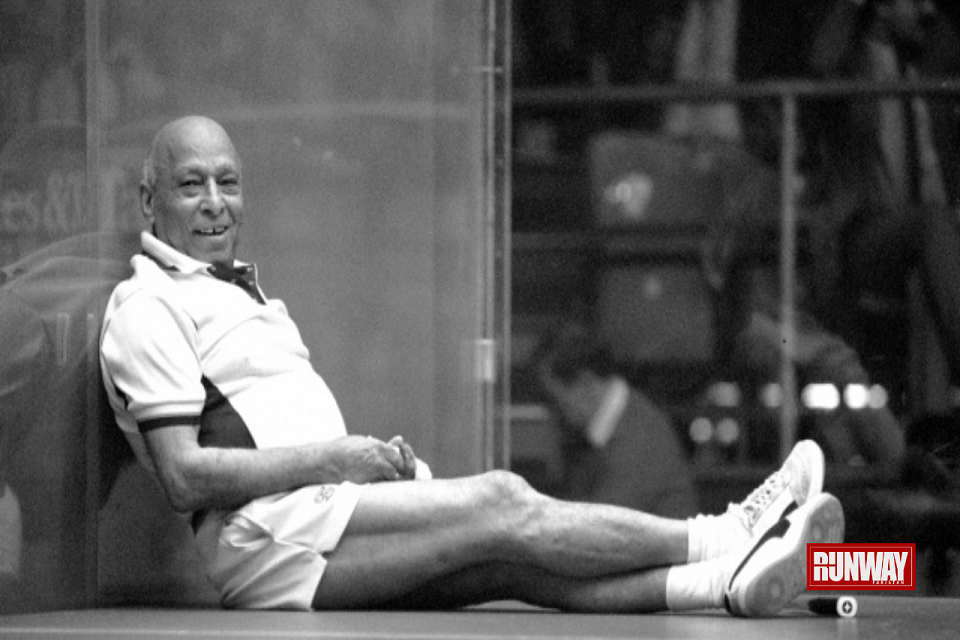 Hashim Khan was born in Nawakille, a small village near Peshawar in modern-day Pakistan, to an ethnically Pashtun family, between 1910 and 1914.[1][3] Hashim was the second cousin of the two other leading Pakistani players of his time Roshan Khan and Nasrullah Khan, whose sons Rehmat Khan, Torsam Khan and Jahangir Khan are also squash players.[1] The exact birthdate is unknown. According to his family members, he turned 100 on 1 July 2014 (the family celebrated his birthday on 1 July).[4] Khan’s father, Abdullah Khan was chief steward at a British officer’s club in Peshawar. He brought Hashim when he was 8 to the squash courts which were used by military men to relax, when not performing duties. Khan’s father died in a car accident when he was 11,[2] and he left school to become a ball boy, fetching balls for the squash players.[4] and cleaner of the squash courts. “For sweeping the place, they paid me four annas a day,” Khan told the New York Times in 1957. “One anna is a sixteenth part of a rupee. one hundred and forty rupee equal one American dollar.

Hashim Khan’s father, Abdullah Khan, was the Head Steward at a club in Peshawar where British army officers stationed in the area played squash.[5] As a youngster, Khan served as an unpaid ball boy at the club, retrieving balls that were hit out of court by the officers.[2] When the officers had finished playing, Khan and the other ball boys would take over the courts.[2][5] In 1942, Khan became a squash coach at a British Air Force officers’ mess. In 1944, he won the first All-of-India squash championship in Bombay, and successfully defended this title for the next two years.[1][2][3] After the independence of Pakistan in 1947, he was appointed a squash professional at the Pakistan Air Force, and won the first Pakistani squash championship in 1949.[3][5]

In 1950, Abdul Bari, a distant relative of Khan’s who had chosen to remain in Bombay after the Partition of India in 1947, and who Hashim had beaten in several tournaments in India before partition, was sponsored by the Indian Government to play at the British Open where he finished runner-up to the Egyptian player Mahmoud Karim. This spurred Khan to seek backing to compete in the British Open the following year.[5] In 1951, when Khan was in his 30s, the government of Pakistan – particularly the Pakistan Air Force – sponsored him for the British Squash Championship. It was the first time Hashim Khan wore shoes on the squash court.[1] Khan travelled to the United Kingdom to play in the British Open, and won the title beating Mahmoud Karim in the final 9–5, 9–0, 9–0.[1][3] He again beat Karim in the final in 1952 9–5, 9–7, 9–0. He won again for the next four consecutive years, beating R.B.R. Wilson of England in the 1953 final; his younger brother Azam Khan in two tight five-set finals in 1954 and 1955; and Roshan Khan in the final of 1956. Hashim Khan was runner-up to Roshan Khan in 1957, and won his seventh and final British Open title in 1958, when he beat Azam Khan in the final.[3] Hashim Khan also won five British Professional Championship titles, three US Open titles, and three Canadian Open titles.

Hashim Khan relocated to the USA in the 1960s, after being invited to teach squash at the Uptown Athletic Club in Detroit.[4] Eventually Khan settled in Denver, Colorado, but continued to appear in veterans’ matches at the British Open. The Denver Athletic Club continues to hold a Hashim Khan squash tournament in his honour every year.